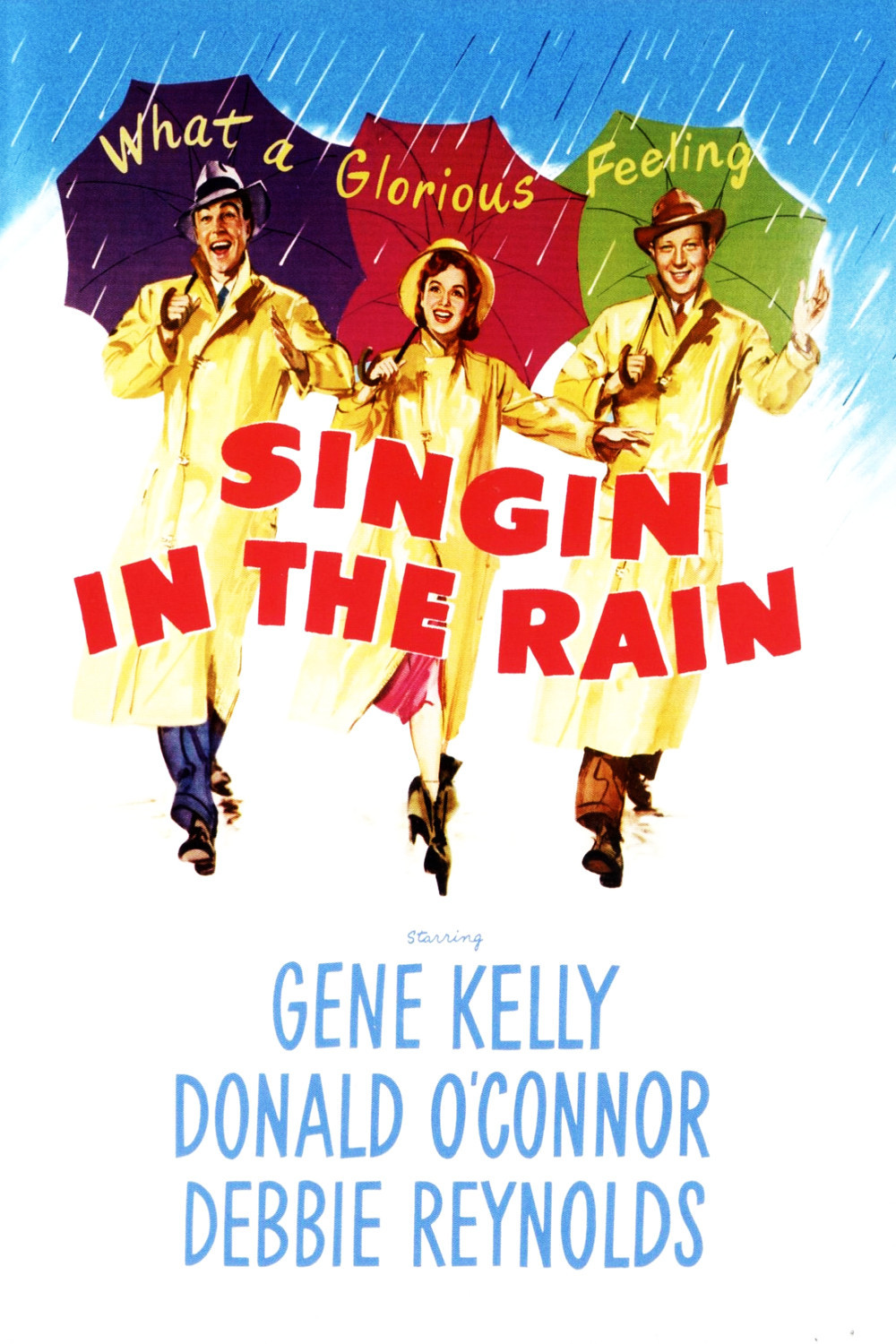 This is the second 50s film I’ve seen within a week that’s set in the 20s!  Singin’ in the Rain was directed, choreographed and starred in by Gene Kelly.  It is a marvellous celebration of Hollywood’s short history.  It celebrates feature film, silent film, film with audio, music, amazing sets, dancing, acting, singing etc. etc.  What more could you want?

The focus of this film is taking us back to the 20s when audio in films was still cutting edge, and the complications that came with it: unwanted sound and actors that had the wrong voices.  The comic telling of the tale in a romantic setting was a wonderful way to be enlightened by this theme.  It’s been over dramatised but I still found it fascinating how audio in films came to be and the funny side of how it was perceived and their difficulties.

Having seen All About Eve recently, set in the theatre, and the playwrite wanting to go to Hollywood to hit the big time in the movies; the Hollywood vs New York and Film vs Theatre rings true more than ever.  At the start, Kathy (Debbie Reynolds) isn’t interested in the famous silent movie star Don Lockwood (Gene Kelly) after he accidentally hitches a ride in her car.  She’s rude to him and makes her dreams very clear.  About her going to New York and being on the stage to do “real acting”, unlike his ‘undignified’ career.  Don asks “What’s your lofty mission in life that lets you sneer at my humble profession?” and she simply replys “I’m an actress…” then “…on the stage”.

They end up reuniting at an actor’s party when the head of Don’s studio is giving a presentation about the cutting edge technology of sound in films!  Debbie pops up, literally, to her embarassment, as a party entertainer.

Gene Wilder was apparently a bit of a perfectionist meaning many of the incredible songs and dances which awe us in this film were products of numerous retakes.  There’s one fantastic shot in a dance routines which is one roll and they nailed it.  Goodness knows how long it took to shoot, but they’re really wonderful scenes.

There’s a random broadway scene in the middle where Gene Kelly starts singing and dancing with absolutely incredible theatre set designs.  I’ve heard this is apparently because Gene Kelly wanted to dance with a professional who was just as good as he was as Debbie wasn’t as good as he’d hoped (poor Debbie!)

Singin’ in the Rain has some cracking tunes, which everyone will know, regardless of whether you’ve seen the film or not.  ‘Good Morning’ and ‘Singing in the Rain’ in particular.  When Gene is actually singing in the rain, in that iconic scene, it’s completely magical and very touching.  It makes you rethink you life and want to get out and enjoy things which are considered not so great normally.

What ever happened to tap dancing musicals?  As pop culture developed, we seem to have lost touch with this marvellous art form.  There had been a gaping hole in Hollywood tap musicals before La La Land emerged and with An American in Paris hitting the stages again, I can see it’s popularity rising again.  I wonder if we’ll have more coming soon.  It’s always nice to see something a bit different and fresh, that we’ve not seen for a while.  My world has been enlightened since I discovered this gem I am keen to watch more Gene Kelly, Fred Astaire & Ginger Rogers etc. masterpieces.  Please recommend some to me that you think are worth watching!

This is such a beautiful film and I truely believe everyone will love it.  A wonderful, light hearted romance, with great singing and dancing.  I managed to record Singin’ in the Rain on Sky Movies although the second part never seemed to tape, so it took a few goes!  Keep an eye out for it, it must get airtime on tv all the time, otherwise it’s available for renting in all the usual spots: Sky Store, Amazon Prime.