This film, directed by Billy Wilder, very quickly became one of my favourite films I’ve watched so far on my little journey of film of the world’s greatest films.  It is therefore no surprise to me that after researching it following my viewing it falls on many of the most loved/favourite comedies of all time.  It is a perfectly touching and beautifully funny film which just glitters with joy.  I fell immediately in love with the two main characters Joe and Jerry (played by Tony Curtis and Jack Lemmon respectively) who go undercover in disguise as Josephine and Daphne (Jerry didn’t like the name Geraldine haha!!!) in order to get a job as musicians in an all girl band in Florida. 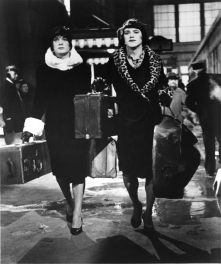 It starts off in the 20’s in the prohibition era when Joe and Jerry are playing in a speak easy and scraping together a living, playing the double bass and sax.  They lose their job when the speak easy get’s shut down and they accidentally stumble on the 1929’s Saint Valentines Day Massacre in Chicago.  It’s freezing cold, times are rough and following their brush with death and needing to escape the mob, the only job they can seem to lay their hands on are these two positions in a lady’s band touring in florida.  Naturally they decide to go for it.  It’s effectively the only option they have so they decide to make the best of a bad situation.  They dress up in women’s clothes, don their best girly voices and board the train to Florida.

Remarkably the two don’t get caught out, which is just fantastic, as you do forget they’re men when they’re playing their respective females.  Curtis and Lemmon had a feminine coach during filming to help them with getting in touch with their feminine sides for this role and I honestly think they nailed it.  On the train over to Florida they meet the band’s beautiful ukelele player, Sugar, played by Hollywood’s sex symbol, Marylin Monroe.  After covering for her when she’s found with a flask, Sugar and Daphne quickly become friends and partake in some secret drinking in Jerry’s bunk in a bid for him to get closer to her.

Joe on the other hand takes a different approach to woo Sugar as she’d previously stated to him she has a thing for saxophone players (which he is) but she always gets her heart broken so is on the lookout to date a rich man with a boat while in Florida.  By dressing up as a rich, English yachtsmanan at the hotel, Joe decides to play hard to get when he “accidentally” trips up Sugar on the beach.  He knew Sugar would fall head over heels in love with him.  Which she does.

“I don’t care how rich he is, as long as he has a yacht, his own private railroad car, and his own toothpaste.” – Sugar

Daphne, staying as a female, frolicing in the sea and dancing all evening, constantly gets chatted up by a gentleman, Osgood, who genuinely does have a yacht and takes a fancy to ‘her’.  Joe and Jerry then decide to make a scheme in order for Joe and Sugar to have dinner on his boat whilst Daphne keeps Osgood busy for the evening.  Joe and Sugar hit it off on the boat and Daphne and develops a deeper relationship with Osgood which ends in a proposal(!)

Some like it hot is set in a glamourous beachside hotel in Florida (actually in LA due to the director’s request that it isn’t far from the studio) and it has some fabulous songs.  “I wanna be loved by you, just you and nobody else but you” sung by the wonderful Marylin.  I was singing that for days after watching the film.  Some like it hot has everything it needs to be a masterpiece comedy.

Wilder reinforces Marylin’s role as a sex symbol throughout, for example how Jerry admires her when we see her for the first time running down the platform to catch the train.  “Will you look at that! Look how she moves! It’s like Jell-O on springs. Must have some sort of built-in motor or something. I tell you, it’s a whole different sex!”.  The costume department also put Marylin in a rather revealing dress whilst she sings in one of their performances which I’m sure everyone double takes at, thinking she’s naked.  Keep an eye out for that one.  Pretty funny.

Apparently Marilyn Monroe was very difficult to work with, constantly getting her lines wrong because she was popping pills and drinking the whole time, she was also pregnant!  They must have been so patient with her as they caught all the scenes with her perfectly.  Marylin’s personality really comes out in this role and she’s such a likeable character.  I don’t want to dwell too much on her because I truely think that Curtis and Lemmon are the stars of the film and it is very much their story.  But Hollywood definitely put up with a lot of Marylin’s antics because she brought in the audiences.

This film is such a lovable barrel of laughs right from start to finish and it is  an absolute pleasure to watch.  A true entertaiment.  It’s a comedy but is also very romantic.  The closing scene is such a gem, what an iconic happy ending.

Some like it hot is currently on Netflix for your viewing pleasure.  You’re welcome.  Let me know what you thought!

All About Eve.  Where to start…. 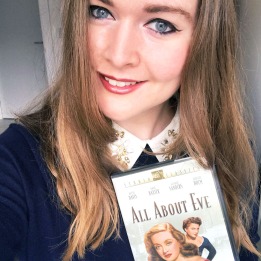 This is one of those films that my mum has ALWAYS been trying to get me to watch.  “If you only watch one black and white film, Jennifer, it should be this one”.  I ignored her most of my life, obviously.  Mum has this on DVD and lent it to me recently for my viewing pleasure.  I’d not heard anything else about it apart from that it’s listed in the AFI and BFI top 100 films of all time.  So surely it must be good.

I eagerly put it in the DVD player and watched it for the first time last week; my eyes have been opened.  What a genuinely fantastic film.  It’s 2 hours of pure enjoyment about Margot Channing, a stage actress, played by Bette Davis, who gets introduced to the young fan Eve Harrington, played by Anne Baxter, in her dressing room one evening.  It’s really funny from start to finish and the 2 hours went in a flash as we were so engrossed!  Eve is in awe of Margot, she goes to every one of Margot’s shows.  They quickly become friends and Margot takes Eve under her wing.  This whole film is definitely a whilwind of friendship, suspicions, glamourous parties, media, awards and backstage backstabbing.  It even features a very young Marylin Monroe!  This must have been one of her first films. 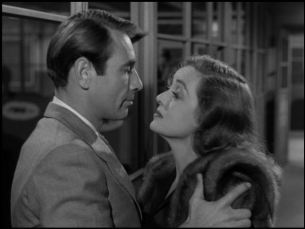 Margot Channing is such a character.  She’s really funny and likeable the whole way through even though she’s a bit of a diva.  What I thought was truely beautiful about this film is that Bette Davis actually fell in love with the actor that plays her on screen love interest, Lloyd, played by Gary Merrill, when they were both already married.  Bette and Gary actually went onto marry for 10 years.  They say that Bette and Gary divorced because Gary really fell in love with the character of Margot Channing instead of Bette herself.  Bette didn’t marry again after that.

Anyway, back to the film, I think this film is like the original, non-thriller version of Single White Female, the Barbet Schroeder film based on the book of the same name but about a girl who will do anything to get close to a certain person and try and dislodge them from where she is in life.  Without giving the plot of the film away, take from that what you will.  But if you enjoyed Single White Female, you’ll enjoy this.  All About Eve isn’t a thriller, as I said, it’s most definitely a comedy/drama, but it has unnerving aspects about Eve, which made me keep thinking about Single White Female and made me want to watch that film again! 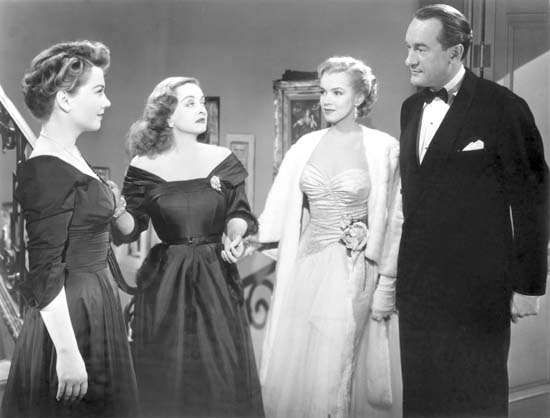 Bette Davis really lives up to her reputation in this film as one of the grestest actressess in the history of Hollywood.  She proves just how great of an actress she is with her sterling performance throughout.  I hear Bette was actually quite similar in real life to her character, which I think is such a gem and probably why she’s so good in this.  She lets her comic and fun personality come through into Margot.  It’s based on a true story as backsage backstabbing was definitely rife in Hollywood in those days.  Bette Davis, as much as I love her, was notorious for having tiffs with various other actressess.  She was best pally with her on screen rival, but hated her on screen best friend.  Apparently when filming this she even made a comment about how Marylin Monroe’s kitty kat voice doesn’t make up for her bad acting, which I thought was quite funny.  Sadly Marylin didn’t get a huge opportuinity to showcase her acting ability, dying so young.  This is the first film I’ve seen her in but I’ll definitely be writing about Some Like It Hot soon so watch this space.

“It’s about time the piano realized it has not written the concerto!” – Lloyd Richards, All About Eve 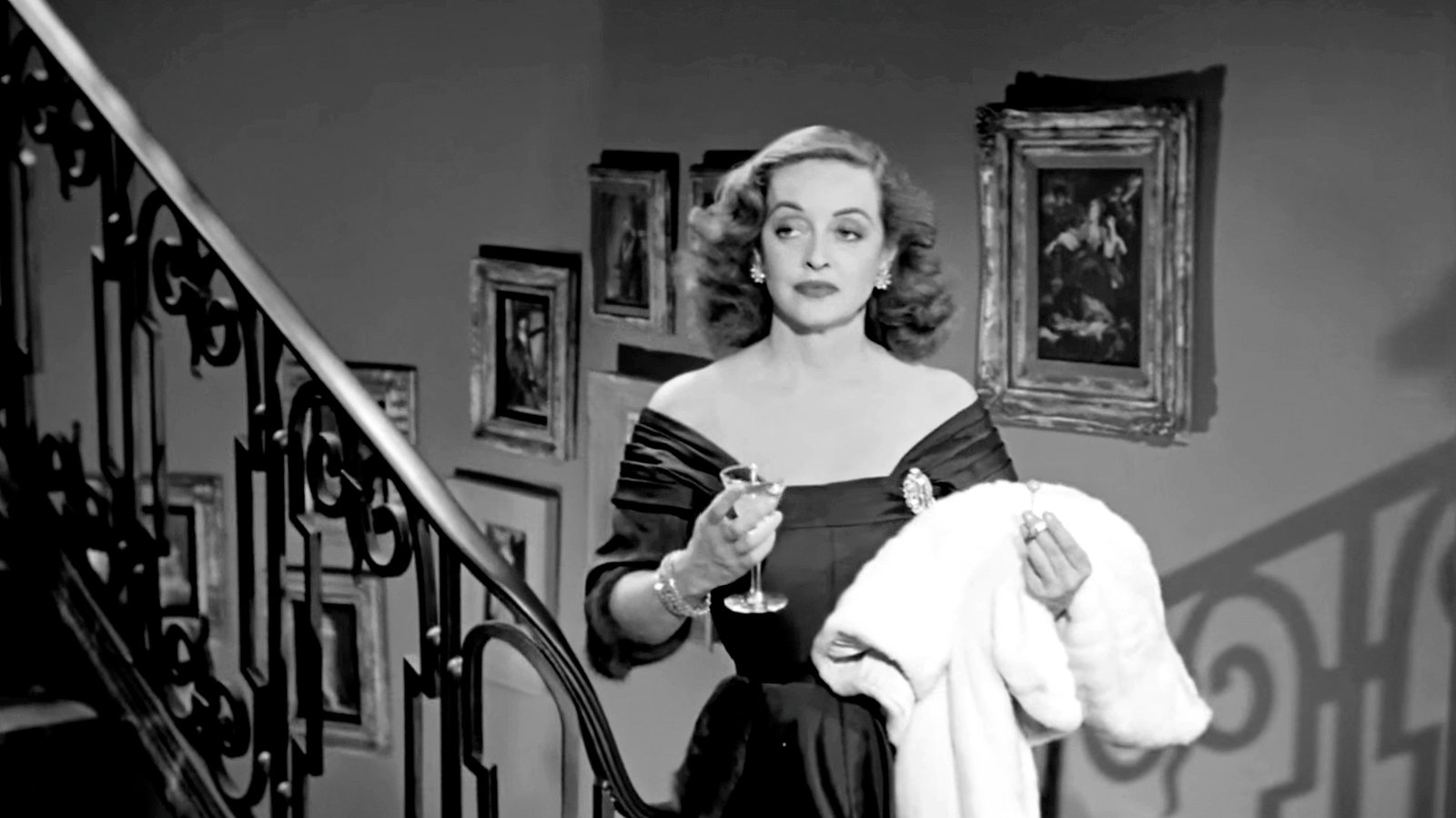 I’ve never labelled myself a feminist but I do think All About Eve, directed by Joseph L. Mankiewicz, is a very progressive film for it’s time.  It’s wonderful that Bette Davis was the star in this film when she 42!  That was really quite old for women in the 50s who were still acting, espcially to land such a leading role.  She probably thought she was almost finished with acting but still got the part of this glamorous actress.  And to think that nowadays older actressess are complaining there aren’t enough parts of older women.  Also, 4 females were nominated for oscars based on their All About Eve performances.  I want to see more films featuring these strong female actresses.

If rotten tomatoes is anything to go by, it has 100% in the tomatometer!  I’ve not seen that on many films I’ve watched before.  All About Eve is truely a charm and recommended to anyone that wants some entertainment for a couple of hours.  It’s old, but timeless.  You honestly forget that it’s even in black and white, you get so invested in the characters.  It makes me kind of wish Hollywood was still like this and made films like this: incredibly beautiful and sophisticated.  It is totally deserving of the best picture Academy Award that it won in 1950.  I always knew it would be good, but it gets the double thumbs up from me.

All About Eve is available on DVD or can be rented from Amazon Prime Video at a steal of £3.49!!  If you’ve not seen it yet, I hope this post gets you adding it to the top of your ‘to watch next’ list.