I’ve been trying to put my finger on why this film is considered such a great film.  Raging Bull, by Martin Scorsese, is the tale of a boxer struggling with internal demons.  I have a black belt in kick boxing so I am fascinated by how boxing is featured in this film, and how it has changed since those days.  It’s no longer about beating each other to a pulp like it is portrayed in the film, but there’s more to it in this film.  The sport reflects the protagonist, Jake La Motta’s life and personality.

Jake la Motta, played by Robert De Niro, is a massive antagonist.  He has a terrible home life, he beat his first wife and cheated on her.  He then married this new woman, Vikki, but his home life is still rife with domestic violence, suspicions and anxiety.  He is a bully and is constantly paranoid that his wife is cheating on him and at one point is convinced that she is having an affair with his brother, Joey.  Jake is also under the influence of the new york mob just to add to his multitude of personal issues.  He is a top professional boxer but isn’t satisfied with his life and has a lot going on in his head.  Someone with his amount of anger really should not be a boxer and that much is obvious in the film.  He uses it as his way of dealing with his life, it gives his life meaning.  By some miracle his wife stays with him throughout it all, which is crazy and seems unrealistic to me, but I guess that’s how it sometimes is in these sort of relationships.  They still love each other beneath all the terrible day-to-day goings on in their life.  Their first date scene is really beautiful and you get a glipse of what Jake could be like if he wasn’t so angry, violent and paranoid.  It is scary though that that is probably the man Vikki fell in love with and the hope of maybe seeing him again is what is keeping her with Jake. 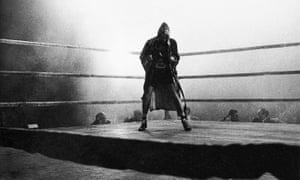 The iconic shot of Jake in the boxing ring shadowboxing in slow-motion at the start of the film when the opening credits start rolling in is really fabulous.  We had to go back to the start and watch it again after finishing because we wanted to see it again!  It gave me the shivers – it’s really haunting!

The boxing match against Sugar Ray, in the middle of the film, where the mobsters bet on him losing is the turning point of the film and of Jake’s life.  Jake get’s beaten to a pulp.  It’s insane how realistic the fight scenes are.  If you don’t like violence, defintely don’t watch this film!  In a way it kind of symbolises where he’s got to in his life.  After this point Jake gives up fighting and opens his own club.  Through his new club he ends up getting into trouble with underage girls, so his life doesn’t get better after quitting fighting, and he still has problems at home with his wife and his brother doesn’t want to know him.

At the start of the film, I didn’t even recognise Robert De Niro, which is him at the end of the film.  De Niro famously gained loads of weight for this part of the movie.  The latter part of the film, 30 years later, is so convincing, he genuinely looks much older and more mature.  After seeing him at the end, the film comes full circle and the poem he reads at the start makes sense, a really beautifully shot scene.  Jake is above all, a really sad, unhappy man, and he still is.

Martin Scorsese’s artistic decision to film Raging Bull in black and white takes you back to the 50s and I honestly forgot this film wasn’t actually filmed in the 50s.  One thing I did notice, and I found it really interesting, is how much they swear.   Films that were made in the 50s completely contrast to this film and show those days in a completely different light.  Everyone was very well spoken and there’s no swearing, no violence and nothing terrible ever happens.  Raging Bull, filmed in 1980 ruined my perception of those times.  Of course I’m sure they did use this language, it was just shocking to see as it’s the first time I’ve seen a film with this perspective based during that period.

The supporting actors gleam just as much as De Niro.  Joe Pesci, who plays Jake La Motta’s brother and manager, Joey & Cathy Moriarty, who plays Jake’s wife Vikki.  Jake’s brother has to deal with all of Jake’s crap over the years which eventually pushes him over the edge.  Jake comes crawling back to try and make up with him in a public display to try and plaster up wounded sores that still gape open between them.  I think it’s great how Joey stands up for himself and doesn’t allow Jake to so easily apologise.  He know’s what Jake is really like and he’s had too many chances over the years.  He’s screwed up too many times.

I’ve not actually seen any other films starring Robert de Niro when he was younger so I am not familiar with his work.  (Taxi Driver is on my ‘to watch & review’ list so look out for my thoughts on that one coming soon!).  De Niro nails his role in Raging Bull and it’s uncanny how believable his character is.  These sorts of films wouldn’t normally have appealed to me, but I gave Raging Bull a go due to it’s top knotch reviews and popularity.  I was pleasantly surprised how much I enjoyed it.  I enjoyed it in more of a thought-provoking art-form sort of way, than a film I’d watch as an enjoyable pass time.  That’s something to bear in mind before you put it on for some light hearted fun – you won’t get any of that with this film!

I downloaded this from Sky Cinema, but it’s also available to rent on Amazon Instant Video for £4.49.  Did you enjoy it?